In 1997 Father Athanasius, pastor of Rubya, who at that time was in charge of 20 orphans, asked Werner Schwarz for support for his project . The aid from Germany enabled the construction of "Don Bosco", the first home of the orphans. In July 2000 the house was opened by the Bishop of the Diocese of Bukoba, Nestor Timanywa. The house is built simple; it consists of a large recreation room for children, a hospital room, a study room and a room for carers as well as a kitchen. First, the equipment was defective. There were no tables, chairs, benches and shelves. On the initiative of Werner Schwarz,  the association "Lebenshilfe für Afrika" was founded in November 2000. The organization claimed responsibility for the children's centre. In subsequent years, an educational center and an infirmary was built and additional carers were employed.

The number of orphans cared for in Kamishango increases from year to year as the HIV virus rapidly spreads in this area. Since 2007, St. Anna sisters care for currently over 240 orphans, including several children of Muslim faith.
Outside of Kamishango, "Lebenshilfe für Afrika" has enabled 15 children to attend the continuative secondary school, and five children are learning a trade.

6.5 hectares of arable land are available to the children's centre. The children learn basics of the agricultural system. Fruits and vegetables are cultivated and the food supply for the children could have been improved significantly due to this.
There is a health post in the center. Children, sick people (including many HIV-affected) and people in need of first aid from around the area visit it and are grateful to receive simple and caring help. Courses in the use and planting of herbal medicine are held regularly with great success.
There are seminars for adults on issues of life, about faith and religion, nutrition, hygiene and first aid, especially about AIDS and about behaviour, treatment, prevention and consequences of the disease. Such events are well attended.

A big step forward for the Children's Centre and also for the village inhabitants was the construction of n approximately 1 km long water pipe with tapping of a spring by "Lebenshilfe für Afrika". The Children's Centre has its own water tank.
The clean water is an important contribution to the health of all orphans and other villagers.

There are signs of a steady development for the orphanage in the next years:

Extremely helpful for the further development of the Children's Centre would be the sponsorship of an orphan for several years. This would give us a certain degree of predictability.
We need on average 50 cents per child per day, equivalent to 180 € per year. You can sponsor a child easily through a form on our “Your Help” 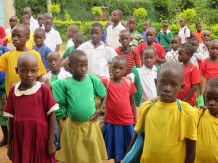 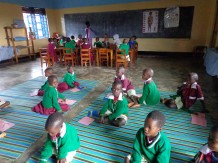 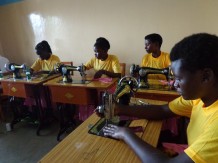